Traditional Indian weddings are a grand affair and involves lavish preparations. The number of people attending a wedding could be anywhere between 500 – 1000. Here, the sanctitude of the ceremony is preserved through numerous traditional rituals and is accompanied by lots of entertainment, fun, colorful dresses, jewelry, lip-smacking foods, music and dance. One can see lots of variations in the Indian wedding traditions according to the cultural community, religion and region. However, most of the basic ceremonies which we are going to discuss in the following sections of the article are more or less the same. 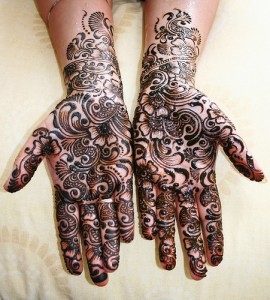 The Indian wedding ceremony is preceded by two major events. One is the engagement ceremony and the other is the ‘Mehendi‘ or ‘Sangeet‘ ceremony. The engagement ceremony takes place on an auspicious date fixed by the elders of the family after consultation with the priest. As compared to the wedding, this is a small affair which is attended mostly by close family members and friends of the girl and the boy. During this ceremony, the couple exchange wedding rings. It is followed by exchange of sweets between them as well as the members of both families. The occasion concludes with music, dance and loads of fun. 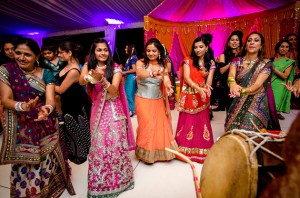 ‘Mehendi’/’Sangeet’ is another fun-filled event that takes place at the bride’s house just a day before the actual wedding. On this day, henna (mehendi) is applied on the bride’s palms and feet with intricate patterns. Other women attending the occasion also get mehendi done on their hands. This occasion is also celebrated with song, dance and merriment. 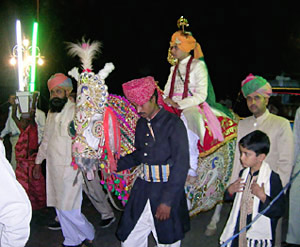 The main ceremony begins with the arrival of the ‘Baraat’ which is a formal procession that includes friends, family members and relatives of the groom . The members who join the Baraat are called the ‘Baraatis’. There is a lot of music, dance and enjoyment in this gathering. 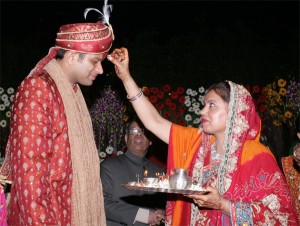 When the Baraatis reach the beautifully decorated wedding venue, the bride’s family gives them a warm welcome. The groom can enter the venue only after the bride’s mother performs a ritual called ‘Aarti‘ by rotating a small holy earthen lamp in front of the groom. Soon after the entry of the groom, the auspicious ‘Jaimala‘ ceremony takes place. Here, the bride and groom meet each other and exchange garlands. This ceremony signifies that the couple accept one another as spouse and pledge to show mutual respect to each other throughout their life. Once this ritual is over, the guests and relatives present the couple with wedding gifts and congratulate them. 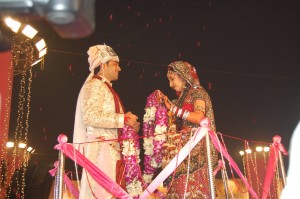 Then, comes the most important section of the wedding, where the bride and the groom exchange vows in front of God while chanting slokas (hymns) with the priest. After that, the ‘Phera‘ or ‘saat phere’ ritual takes place where a knot is tied with a part of the bride’s dress and the groom’s dress, and they move around the ceremonial fire for seven times. Each round or phera has its own significance. In the first three rounds, the groom follows the bride which signifies that the bride will take charge in the earlier part of their life and in the next four rounds the groom leads which means he would lead in the later part. 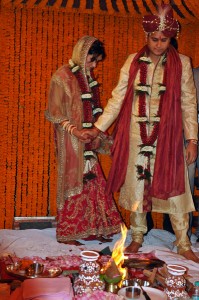 In various communities, there is a ritual of putting ‘sindoor’ or vermilion on the bride’s parting of the hair and a gold or silver chain with black beads called ‘mangal sutra‘ around her neck. Most of the married Hindu women are supposed to wear sindoor in their hair parting and mangal sutra for the rest of their married lives. These two are considered as the sacred symbols of marriage by them. 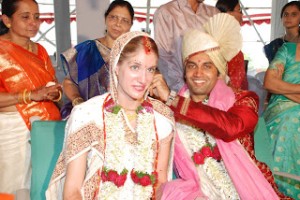 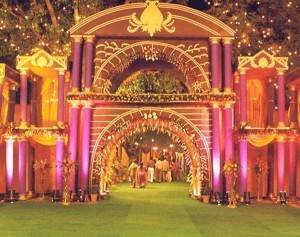 The wedding ceremony is followed by a grand feast in which the most sumptuous food is served. The best possible delicacies are prepared for the occasion. The food largely depends upon the region to which the couple belongs to. Like in some communities, only vegetarian foods is served, while in others you will find all types of food. Sweets are an important part of the menu. There are at least 4-5 different varieties of sweets, if not more, served on the occasion. 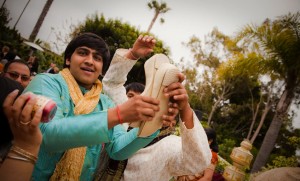 Another interesting feature of the wedding ceremony is the games. ‘Hiding the Shoes’ is the most popular among them. It is a kind of prank played by the bride’s sisters on the groom. Before the start of marriage rituals, as soon as the groom removes his shoes, his sisters-in-law hide them somewhere. Later, they demand money from the groom in exchange for his shoes. Lots of negotiations and bargaining take place between the two parties until they finally reach an agreement. There is a lot of fun and merriment involved in the process of bargaining and everyone enjoys it. Besides, there are also many more interesting games that are being played between the bride and the groom. Friends and relatives of both families sit in the audience to support the bride and the groom. 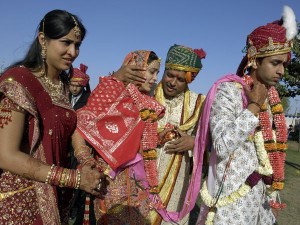 Finally, the time comes for ‘vidaai’ when the bride bids adieu to her parental house with blessings from the elders in the family to start a new life in her husband’s house. The common feature of all Indian wedding ceremonies is that both the parties take the best possible efforts to make the event a successful one. It is not just a celebration of marriage between two people, rather it is a joyful occasion to celebrate the unification of two families.