Facts Behind The Hindu Wedding Customs

Hindu weddings are known for its prom and gander. In Hindus there are many cultures with different traditions on the whole. In India wedding is treated as the most special occasion marking the union of two souls for a lifetime. Every customs and rituals in a wedding has its own story and belief behind it thus giving a meaning to the entire process. 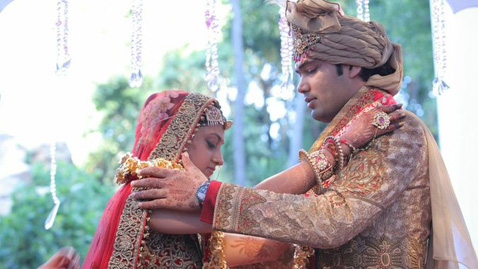 Today, we have picked India and Hindu marriages to explore on the various rituals and understand each of them separately. Below are the rituals. Have a look:

Hindus do not just pick their wedding date randomly. The astrologers declare a certain time period marked as auspicious to tie the knot. It generally falls around months of January, February, June, July, November and December.

In India marriage is not only about the union of two people but also the two families. Therefore, a bulk lot of the customs involve participation of the family members from both sides. The engagement ceremony sees the families, friends and relatives exchanging gifts from both sides.

Most Hindu weddings are more than one week long. It starts with the “Haldi” ceremony, where both the bride and the groom are smeared with turmeric paste separately. This is because turmeric is considered to be a natural agent to glow the skin. Thereafter, both the bride and the groom are forbidden to meet or get out of their house till the wedding day.

Mehendi ceremony is one of the most lavish ceremonies of all the Hindu ceremonies. Here, the female relatives and friends of the bride gather together and apply henna to the bride hands and feet. The groom’s name is hidden in the beautiful pattern which he has to find out later on.

The Mehndi and Sangeet ceremony are mostly conducted on the same day. All the friends and relatives come together and dance and make merry to the tune of traditional songs.

Now this is interesting. In India, amongst the Hindus, the groom arrives on the bride’s doorstep, seated on a white horse, as the white beast is considered auspicious. This tradition has been around the Hindu society for a long long time now. However, today, the white horse is replaced by a wedding coach car. But, those who can afford still prefer the symbolic white horse.

The journey till the bride’s home is actually a procession with merry making and fanfare, the journey known as the “Baraat”. The groom is surrounded by his friends and relatives who dance all the way till the wedding venue where they are welcomed lavishly with gifts and garlands by the bride’s side.

The most important ceremony is the “Saat Pheras”. The bride and the groom walk around the holy fire seven times while each round represents a vow. The couple exchanges their wedding vows in presence of their family. After the vows, the groom fills the bride’s forehead parting with Sindoor- the sign marking a married woman in Hinduism.

On the wedding day, sisters of the bride steal the groom’s shoes and the groom has to pay whatever amount of money they ask for in return. The money given is also considered auspicious. A quite playful environment prevails.

The morning after the wedding, the bride is given a lavish farewell by the entire family. This ceremony is called “Vidaai”. It is the most emotional part of the wedding. The couple is blessed by the elders as they get ready to leave for he groom’s house.