Indian weddings are known as the Big Fat Wedding for a reason. Every ceremony is grand with the perfect blend in tradition, dipped in ethnicity. The country’s wedding market is estimated to be worth Rs. 1,500 billion (about$30 billion) with about 10-15 per cent growth every year. Therefore, marriage invites are becoming glitzy and exclusive affair. They may be Swarovski studded or could match the bride’s trousseau too.

NRIs are the major target of this market. For example, the lavish wedding of the Britain-based Indian steel billionaire Lakshmi Mittal’s daughter in 2004 was estimated to be a 30-million pound affair. 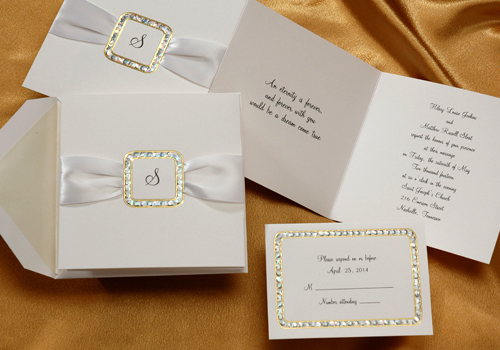 Gourav Rakshit, the business head of shaadi.com opines, “It’s been studied that NRIs based in the US, Britain, Canada, the Middle East, Australia and New Zealand want their marriages to be complete Indian affairs and this desire propels them to visit India for the selection of cards, jewelry and venues.” Exotic invitation cards are also gaining popularity today.

“People from around the globe are splurging on wedding cards like never before… This has added to the growth of designers, manufacturers and paper importers. Since cost and variety have gone up, there is no end to innovation,” says CEO of Kapco Press, Neeraj Kapoor, who has been active for 26 years now.

“People no longer want simple designs. More designers are entering. Prices have skyrocketed. Everyone, including the NRI, asks for the fanciest and most exclusive design even if it’s not worth the amount spent. Some even say Indian designs are simply outstanding and can’t be found anywhere else,” Kapoor adds.

Other classy designs include designs like oversized envelope with Lord Ganesha’s picture drawn on it to those exquisitely worded invitation.

Wedding card designer Raj Kapoor from brand Kaypee says,” Innovation is the key and keeping this in mind, ethnic designs have made a comeback. Also, personalized and handmade cards are a big trend nowadays as many people feel these add an emotional touch to the occasion.”

He adds, “There are people who ask for multi-folded cards which can be made to order, while others ask for scrolled out cards with matter printed on it.”

Shalini Punj owner of Vivaahsutra another prominent wedding card company in the country says, “The price of wedding invitation cards depends on the material used. A simple wedding card starts at Rs. 30 per piece and it goes into lakhs for the Swarovski embellished multi-folded cards with box attached to it.”

“Vertical, horizontal and multi-colored stripes are termed as one of the most sought-after trends this season. Also, embellishing the invitation with small rhinestones, pearl-toned beads or Swarovski crystals makes a low-key invitation style fashionable. The list is endless,” says card designer Piyali Rana.